How To Set Up NIS for Ubuntu servers

Network Information Service (NIS) is a distributed naming service based on Remote Procedure Call (RPC). It enables easy sharing of various information across the cluster including username, password, hosts and service ports. Such a centralized user management system is also a necessary prerequisite for setting up cluster management system including SLURM, which requires user & group synchronization across the cluster.

NIS uses a client-server arrangement. By running NIS, the system administrator can distribute administrative databases, called maps, among a variety of servers. Servers are further divided into master and slave servers: the master server is the true single owner of the map data. Slave NIS servers handle client requests, but they do not modify the NIS maps. The master server is responsible for all map maintenance and distribution to its slave servers. Once an NIS map is built on the master to include a change, the new map file is distributed to all slave servers.

Clients are hosts that request information from these maps. NIS clients “see” these changes when they perform queries on the map file — it doesn’t matter whether the clients are talking to a master or a slave server, because once the map data is distributed, all NIS servers have the same information. 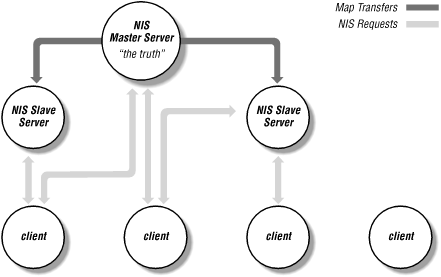 NIS uses domains to arrange the machines, users, and networks in its namespace. However, it does not use a domain hierarchy; an NIS namespace is flat.

You’ll be prompted to enter your preferred domain name during the installation process. Here the domain name is hulk.nis.

Specifically, edit NISSERVER to be master

In master’s /etc/hosts, there should be at least all the slave servers.

TIPS: NIS usually is for info sharing in LAN. However, as long as port 111 (for rpcbind) is open, it is capable of doing RPC call across internet.

By running ypinit -m, NIS will utilize the local user system as its cornerstone to build the network user information.

You’ll be prompted to enter the list of servers (master and slave). The first host added should be the hostname of the master server, followed by all the slave servers in the system.

During the process it will also prompt to enter domain name. Use the same domain as the NIS master.

Add the master / slave server you want to request info from.

If you want to use hostname instead of server IP, make sure to specify it in /etc/hosts of the client.

Each machine has a switch file in its /etc directory. Each line of that file identifies a particular type of network information, such as host, password, and group, followed by one or more locations of that information.

The available information sources are listed in the following table:

Open /etc/nsswitch.conf to add nis as an information source.

Add nis to the end of passwd, group, shadow, gshadow and hosts.

The set up process of slave server is an approximate combination of client set up + master set up.

Specifically Step 1 to 4. This is for establishing RPC connection with master.

Specifically, edit NISSERVER to be slave

It is important to allow the master server to access.

In slave’s /etc/hosts, there should be at least the IP of master server.

This operation will pull information from the master to the slave.

If the slave master is not added in Step 5 of master set up. On master server, it is necessary to rerun ypinit -m and add the slave server when it prompts to enter the hosts.

In order to push the changes in the maps on master, you also need to edit the /var/yp/Makefile: